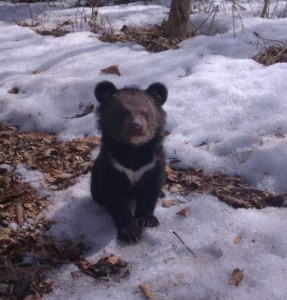 Pasha’s story is very sad, but,  unfortunately, rather common. His mom was murdered by poachers right in her den, while still hybernating with her newborn babies. We are not sure what happened to Pasha’s sibligns, poachers might have taken them to keep as pets or to be sold to circuses or traveling zoos. Pasha got lucky, in early March 2018 he was found by tourists wandering around the den, weak,  hungry, dehydrated and very scared.

They heard him cry and, despite the fear of mama bear, rushed to his rescue.

Once it was clear, that Pasha’s mama was nowhere to be found (later they noticed traces of fresh blood), they called the rangers, who immediately contacted Utyos. Eduard, the centre’s director had to travel for nearly 1000 km to get Pasha. This is how he found his temporary home at the centre.

Will you adopt Pasha to help him grow strong?

*Please, state “Pasha, the bear cub” in your donation, thank you!